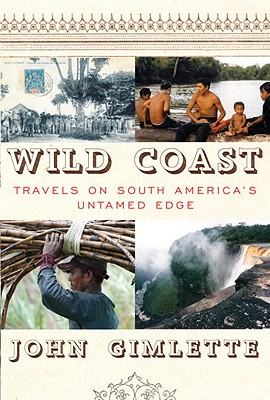 By John Gimlette
Email or call for price
Special Order

Guyana, Suriname, and French Guiana are among the least-known places in South America: nine hundred miles of muddy coastline giving way to a forest so dense that even today there are virtually no roads through it; a string of rickety coastal towns situated between the mouths of the Orinoco and Amazon Rivers, where living is so difficult that as many Guianese live abroad as in their homelands; an interior of watery, green anarchy where border disputes are often based on ancient Elizabethan maps, where flora and fauna are still being discovered, where thousands of rivers remain mostly impassable. And under the lens of John Gimlette—brilliantly offbeat, irreverent, and canny—these three small countries are among the most wildly intriguing places on earth.

On an expedition that will last three months, he takes us deep into a remarkable world of swamp and jungle, from the hideouts of runaway slaves to the vegetation-strangled remnants of penal colonies and forts, from “Little Paris” to a settlement built around a satellite launch pad. He recounts the complicated, often surprisingly bloody, history of the region—including the infamous 1978 cult suicide at Jonestown—and introduces us to its inhabitants: from the world’s largest ants to fluorescent purple frogs to head-crushing jaguars; from indigenous tribes who still live by sorcery to descendants of African slaves, Dutch conquerors, Hmong refugees, Irish adventurers, and Scottish outlaws; from high-tech pirates to hapless pioneers for whom this stunning, strangely beautiful world (“a sort of X-rated Garden of Eden”) has become home by choice or by force.

John Gimlette has won the Shiva Naipaul Memorial Prize and the Wanderlust Travel Writing Award, and he contributes regularly to "The Times "(London), "The Guardian, The Telegraph, The Independent, "and "Conde Nast Traveller. "When not traveling, he practices law in London.

“To the admirably (or alarmingly) fearless Gimlette, the Guianas remain a terrain of matchless allure . . . He has written a spirited historical, political and personal travelogue guaranteed to arouse the adventurous reader’s wanderlust . . . It offers a gorgeously vivid depiction of one of the last untamed places on the planet.”
—New York Times Book Review

“An engaging odyssey . . . Gimlette shows the region to be endlessly fascinating, if often in a dark way, [and] summarizes sweeps of history with a quinine-dry wit . . . His books manage the neat trick of making the globe feel supremely vast and mysterious once again. He does this in part by writing a narrative that sounds as if it had been penned by an Edwardian explorer—you can almost envision his pith helmet—but also by crafting a superb travelers’ tale in which yesterday has far more ballast and heft than the fleeting happenings of today.”
—Wall Street Journal

“Wild Coast is the best kind of travel writing: tough-minded and humorous, but above all thoughtful.”
—Times Literary Supplement (UK)

“Gimlette’s first South American travel book, At the Tomb of the Inflatable Pig, captured with great wit and learning the quirkiness of Paraguay. He has now produced a no less remarkable portrait of the highly idiosyncratic countries known collectively as Guiana . . . Wild Coast is driven by extraordinary dedication, an insatiable curiosity in everything, and an enormous empathy for other people. Gimlette’s descriptions of landscapes are often hauntingly beautiful, his sense of humour is engagingly dead-pan . . . His book is also characterised by a thoroughness of research that puts most travel writers to shame . . . In lesser hands, such richness of texture and abundance of learning might have led to indigestion on the reader’s part. But Gimlette manages to steer through all the material with a great lightness of touch, skillfully weaving the personal narrative into a lucid and lively account of a multi-cultural history . . . Particularly memorable are his incisive portraits of the many crazed, tragic, and eccentric figures associated with these lands . . . All in all, Wild Coast is a reminder not just of the magnificent and endless strangeness of South America, but also of the way in which travel literature can still fulfil its role of bringing to life some of the world’s unjustly neglected corners.”
—The Spectator (UK)

“A completely fascinating book. It opens up a forgotten corner of the world with tremendous flair and shrewd observation.”
—William Boyd, author of Any Human Heart

“A wonderfully entertaining account of a journey through one of the world’s least-known places . . . Gimlette, an insatiably curious storyteller, revels in the strange mix of people and traditions . . . Amid vivid descriptions of torrential rivers and golden grasslands that are home to some of the planets’ largest ants, otters, and fish, the author recalls encounters with a stunning variety of intriguing characters . . . Colorful and immensely readable.”
—Kirkus Reviews (starred)

“A few pages into his excellent new book, Wild Coast, John Gimlette tries to convey the forbiddingly impenetrable nature of his subject, the Guianas of northeastern South America, a nettlesome tangle of swamp, lowlands, crisscrossing creeks and rivers so resistant to navigation or settlement that the landscape remains one of the wildest, most unknown territories on the globe . . . These are words to quicken the pulse of the armchair traveler, for whom no landscape resonates quite like the exotic, the hard to get to, the uncharted . . . Between cellphones, Google Earth, and jumbo jets, it seems there’s nowhere in the world left to explore, but [writers like] John Gimlette prove that travel books still have something to tell us.”
—The Daily Beast

“The pages provide a rollicking, witty and informed account of what crawls out of the Guianas’ jungles into the author’s path. Armed with a rucksack and a keen sense of the absurd, Gimlette drives, flies and floats through Guyana, Suriname, and French Guiana . . . The author has an uncanny ability to nail down his characters with a few well-chosen words . . . But the book’s real strength lies not in the living, but the dead . . . Gimlette brings history to life. He artfully merges assiduous research with a storyteller’s gift, presenting the reader with a catalogue of loveable rogues, inveterate explorers, eccentric naturalists, and idealistic romantics. These stories provide more than just a good yarn. They offer a door into the darker aspects of the Guianas’ past—and thereby a window on to much of the present.”
—The Guardian (UK)

“Gimlette leads us where few Europeans venture, beating a path through the jungle to find the juiciest tidbits of Guiana’s myth and history . . . This is a meaty and unusual travelogue.”
—Associated Press