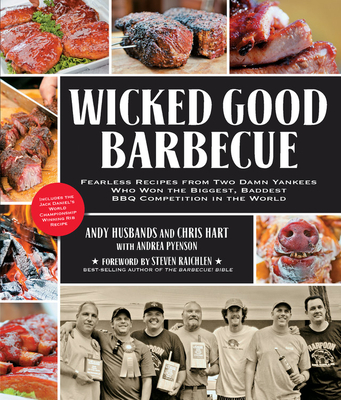 By Andy Husbands, Chris Hart, Andrea Pyenson, Steven Raichlen (Foreword by), Ken Goodman (By (photographer))
Email or call for price
Out of Print

"A lot of serious barbecue champions have been waiting to see what secrets would be revealed in Chris and Andy’s book, and they are not going to be disappointed! These guys are both finely tuned chefs and hardcore pitmasters, a rare combination, and they’ve shared it all. I now understand how they won the world championship. The barbecue cookbook bar has just been raised." —Ray Lampe, Dr. BBQ, author of Ribs, Chops, Steaks, and Wings

"If there were ever a book that personified the ethos of the chef and brings it right into your kitchen, it is Wicked Good Barbecue. The audacious and tasty recipes showcase everything from the modern classics to serious in-your face-barbeque. Wicked Good Barbecue is a must for every grill aficionado." —Chris Schlesinger, coauthor of Thrill of the Grill and owner of East Coast Grill & Raw Bar in Cambridge, MA

How did two guys from Boston win hundreds of barbecue ribbons, thirty Kansas City Barbecue Society championships, and the biggest prize of them all, the Jack Daniel's World Championship Invitational Barbecue? By standing over glowing coals and smoking barrels for days on end to develop barbecue recipes not just good, but "wicked good" as they say in New England.

Award-winning chefs Andy Husbands and Chris Hart reveal their secrets to competition-winning barbecue—from the actual recipe that won the Jack Daniel's World Championship Invitational, to the 25-Step Championship Chicken that melts in your mouth and the American Royal First Place Beef Brisket, king of them all, hardest to master and unforgettable to eat when it's done right.

Wicked Good Barbecue ain’t your daddy’s barbecue. It’s just the best you’ve ever tasted. So if you want to cook competition-worthy chow, and you think you've got what it takes or want inspiration from the best; crack this book, pick up your tongs, and fire away. Wicked Good Barbecue is your guide to fun, fearless, and fantastic barbecue no matter where you're from.

Andy Husbands is an award-winning pitmaster who began developing his own unique style of cooking upon opening Boston’s Tremont 647 in 1996 and later, Sister Sorel. His latest culinary venture, The Smoke Shop, culminates Husbands’ continued success and pays homage to his extensive background in the competitive barbecue circuit. His honest, approachable fare makes Smoke Shop the "Best Barbecue Restaurant" according to Boston Magazine, and the restaurant has been praised in The Boston Globe, Wine Spectator, Star Chefs, and more.

After nearly three decades in the restaurant industry, Husbands serves as one of Boston's most celebrated culinary leaders and foremost authority on regional Barbecue and live-fire cooking. He competed on the sixth season of FOX Television Network’s fiery Hell’s Kitchen and is internationally-recognized for his BBQ team, IQUE BBQ, who became the first New England team to win the World Champions of BBQ title in 2009 at the Jack Daniels World Championship in Tennessee. Husbands is a large contributor to Share Our Strength as well as an active board member of the Massachusetts Restaurant Association, who acknowledged him as the 2014 Chef of the Year and a Rodman Celebration Restaurant Chair. He has also co-authored several cookbooks, including Pitmaster, Wicked Good BBQ, Wicked Good Burgers, Grill to Perfection,and The Fearless Chef.

Chris Hart, winner of the Jack Daniel Invitational World Championship in 2009, has dominated the competition BBQ circuit for the past 10 years with his team, IQUE. The team was the first group of Northerners in barbecue history to win a World Championship. Chris spends his days developing software, but his passion for cooking barbecue has him following the competition BBQ trail on weekends, pitting his talents against the best pitmasters in the U.S. Chris has cooked multiple barbecue tasting dinners at the James Beard House in NYC. He has appeared on the TV show BBQ Pitmasters, and is a Food Network Chopped Champion. He is coauthor of Wicked Good Barbecue, Wicked Good Burgers, and Grill to Perfection.

Andrea Pyenson has been writing about food for more than a decade and enjoying it for a lot longer than that. Her writing about food and travel has appeared in The Boston Globe, edible Boston, edible Cape Cod, msn.com, oneforthetable.com, The Washington Post, and Fine Cooking, among others. Pyenson was associate editor of The Boston Globe Illustrated New England Seafood Cookbook and assistant editor of 52 Weeks Cheap Eats: Dining Deals in Greater Boston.

Multi-award-winning author, journalist, cooking teacher, and TV host, Steven Raichlen is the man who reinvented barbecue. His best-selling Barbecue Bible cookbook series and The Primal Grill and Barbecue University(tm) TV shows on PBS have helped people all over the world ascend the ladder of grilling enlightenment.

Ken Goodman is a freelance photographer based in New York City. He specializes in food and chef photography, concerts, events, portraits and cookbooks. His work has appeared in Rolling Stone magazine and Art Culinaire, and he has photographed Mario Batali, Jimmy Fallon, Jon Stewart, Michael Stipe, The Edge, Sean "Puffy" Combs, Mariska Hargitay, Stanley Tucci, Jon Bon Jovi, and Anthony Bourdain (among others). Prior to his photography career, he spent 20 years in the restaurant industry as a classically trained chef, culinary educator, and restaurant consultant.

"This cookbook makes it clear that barbecue competitors Husbands (chef & owner, Tremont 647; The Fearless Chef) and Chris Hart achieve success through an undying commitment to their obsession. Their Seven-Layer Dip is a highbrow concoction of shredded short ribs, crab rémoulade, beef tartare, salmon spread, and more, and their other recipes (except perhaps the cocktails and desserts) are equally challenging. With help from food writer Andrea Pyenson, their prose exudes energy and confidence, and that makes this an entertaining read. VERDICT: Mere mortals may not have the patience for recipes like Six Day Bacon of the Gods or 25-Step Championship Chicken, but fervent BBQ diehards with their eyes on a championship will believe their prayers have been answered." - Library Journal