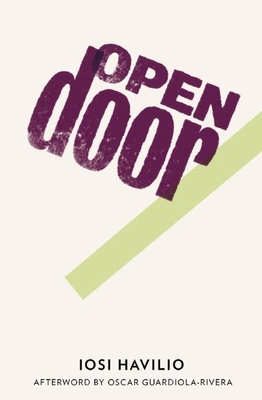 -An ambiguous tale that verges on dark comedy. . . . With skill and subtlety, the novel hints that a whole society might labor under an illusion of liberty.---The Economist

When her partner disappears, a young woman drifts towards Open Door, a small town in the Argentinean Pampas named after its psychiatric hospital. She finds herself living with an aging ranch-hand, although a local girl also proves irresistible . . .

Iosi Havilio bursts onto the Argentine literary scene after Open Door was highly praised by some of the country's most influential critics and writer, including Beatriz Sarlo and Rodolfo Fogwill.

Iosi Havilio (b. 1974 Buenos Aires) Open Door is his first novel. His second novel is Estocolmo (Stockholm, 2010), and he is currently working on a novel - Paradises - that follows on from Open Door. Paradises will be published by And Other Stories later in 2013. He has become a cult author in Argentina after Open Door was highly praised by the outspoken and influential writer Rodolfo Fogwill and by the most influential Argentine critic, Beatriz Sarlo. Beth Fowler: (b. 1980 Inverness) currently lives in Aberdeen. She has spent time in Chile as an English teacher and is now a full-time translator from Spanish and Portuguese into English. In 2010 she won the inaugural Harvill Secker Young Translators' Prize and in 2011 translated Havilio's Open Door for And Other Stories, receiving high praise for her translation from the doyenne of Spanish translators Margaret Jull Costa. More recent work includes a translation for Granta magazine's Best of Young Brazilian Novelists issue. Oscar Guardiola-Rivera is the writer of the award-winning What If Latin America Ruled the World? (Bloomsbury, 2010), chosen as one the best non-fiction books that year by The Financial Times and reviewed in The Washington Post, The Sunday Times, The Guardian, BBC Radio 4 Start the Week, with Andrew Marr, Al-Jazeera's The Riz Khan Show, Folha de Sao Paulo, and other major newspapers and media around the world. He has published in Granta, is a weekly columnist of El Espectador (COL), and a frequent contributor to the BBC World Service Nightwaves, The Stream, Monocle Radio 24, NTN 24, and Al-Jazeera, among others. He has been invited to take part in the Hay Festivals (Wales, Colombia, Lebanon and Mexico), and contributed as a curator and a speaker with the Serpentine Gallery, Southbank Centre, Intelligence Squared, Tate Modern, Pen International, and Colombiage. Born in Colombia, he was educated in that country and in Great Britain. He graduated as a lawyer in Bogota (Universidad Javeriana, 1993) after leading the Student Movement that initiated the 1990's wave of constitutional reform throughout Latin America, and obtained his LLM with Distinction at University College London, and his PhD in Philosophy at the King's College of the University of Aberdeen. He is on the editorial boards of Naked Punch: An Engaged Review of Arts & Theory; International Law. Colombian Journal of International Law; Universitas. Xavier University Law Review, (COL); and Open Law Journal and is on the advisory board of the Law, Social Justice & Global Development Journal, and is recognised as one of the most representative voices of contemporary Latin American philosophy and literature.